As humans, we sometimes forget that we aren’t the only intelligent communicators in the world. Animals have a profound connection in nature. They communicate effectively, live their own lives and create strong bonds with other animals and humans alike. However, sometimes owners of pets give up on the animals they were committed to looking after. Everything in nature is connected, and this is how a left-behind rabbit changed the lives of a caring family who wanted to help the little animal and found out that they needed some help themselves.

I was approached by a client who had just adopted a little rabbit that was left behind by a family who was moving and was not able to bring any animals. The lady who contacted me took it upon herself to care for this rabbit. However, this family also has a cat, which is a natural predator of the rabbit.

The lady has a young daughter who was having nightmares, and she was alarmed by this. Her daughter explained that she kept seeing the rabbit in danger when it got close to the cat and was worried that something terrible was going to happen. The lady also realized that the rabbit was chewing furniture and hiding in dark corners for safety, which is natural for fall back. She sought help to find out why the rabbit seemed to be unhappy and acting out. I was grateful that she reached out to me, and we planned on a session with the rabbit, the mother, and myself.

During our session, it came to light that the mother was having a tough time with her health. So the rabbit starting acting out, and the family was struggling to figure out why this was adding a lot of stress. I asked them about their daily routines, and it seemed as though it wasn’t structured, and neither was the routine for the pets they had at home. The family did things differently every day. Breakfast was at different times, as was lunch and diner. No one honestly had any anchors during the day; it was all free flow. The rabbit had two different places where it lived one for the evenings and one outdoors for the during the day to be safe and be in a more natural space. The cat, however, is very independent and prefers doing things on its own.

I decided to talk with the animals to figure out what it was they had to say and explained to them that they need to get along better and not be stress of the family’s sake. Even though they are each other predators, they can still find a way to get along.

We then created a few small daily rituals with the mother for the family to help them structure and improve their meals for better nutrition and to lower the stress. I also added some routines for the animals to help them both feel more part of the family, including more attention for the cat, as he had felt a bit left out.

With a little bit of cooperation from the family and the animals during that one session, we created a more harmonious environment for them all. Everyone’s voice in the family was heard in the session, and it helped this family in making better decisions with daily activities, it also helped the family with adding new healthy awareness. Communicating better as a family brought on positive change to this home. It was also clear that the animals were a big mirror for the humans.

Sometimes it takes longer than one session, but it is possible to create a better and more comfortable space for you and your pets with open communication with your animals. Animal communication strives to help families and their pets through physical, emotional and behavioral challenges. All this can be done remotely, too, over the phone and Skype with some planning beforehand.

If you feel like your pet(s) are acting out and trying to tell you something, e-mail me, and we will set up your first session towards a beautiful journey. 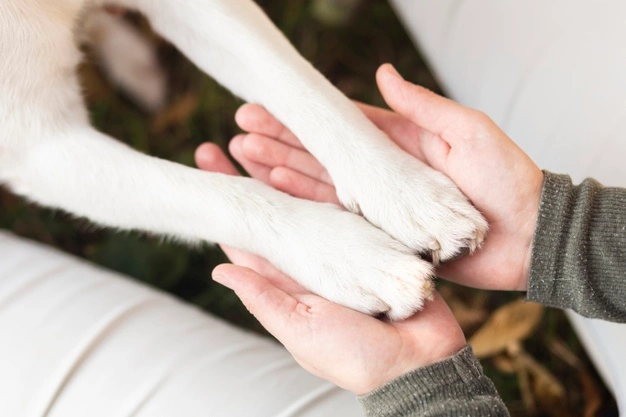 Get To Know Renée.

Find out more about me in a one-on-one 15min introduction call. Let us see what I can help you with when it comes to you and your animal.
Please note meetings are scheduled and spots are limited.