I got to know Emiel van de Koekoek (aka Albert then) as my first massage client. He was standing in the corner, being a bit grumpy. I thought he must be in pain, and of course, I found lots of tightness in his body. Being very focused on this body, I didn’t ask him anything else. So I worked with on his body’s pains and aches, and slowly he started to welcome me and our appointments. I also got some excellent feedback from his riders that he was calmer, and he was responding better. I thought, yay!

As time moved on, Emiel became more and more part of our family. My son started riding him twice a week, mostly because not a lot of riders enjoyed his behaviour or the tricks he loved to play with his riders. Emiel loved to play around with his riders and hoped that they would lose interest in him. He had given up on finding a forever person. My son was tall enough and very willing to ride him, so why not. Emiel was always very well behaved.

We started to hang out more and not long after, my son was able to go to a competition with Emiel. That was a big deal, the first competition in our family for the kids. We got Emiel ready, and that’s when we figured out that his name was Emiel. We always called him Albert, as that was his stable name. When his name was called out by the jury, his whole attitude changed, he got taller and paid more attention; it was fascinating to watch. It was a moment to remember as he switched gears completely.

The show went so-so as Emiel and my son had nervous energy. Both were not listening to one another, and well, let’s leave it at describing that it was a great learning moment. Getting back to his stall, he was not a happy boy, and we were wondering where this name Emiel van de Koekoek came from as we had never heard of his official name. We kept calling him Albert, as that was his name at the barn. Later we understood that he was disappointed about that; he wondered why we didn’t pick up his given name.

Time for a chat

Learning more and more about his background was so much fun. We spoke to other people who rode him and where he was born. Of course, we did some google dives as well. I thought it was time to have a chat with Emiel as well. As it was clear that he always behaved with our family, but had no intention to act normal with anyone else. It wasn’t that black and white; he reluctantly did do what he was told.

I waited for a calm day, got myself a latte, and sat down with Emiel. He was curious enough to be interested in talking to me. Maybe because it was the first one and there were later sessions, he didn’t want to talk to me. He is clear about when he wants to talk to you or not, which I love about him. Gosh, I wish people were this clear.

I asked him about what he thought of our family. If he enjoyed all the time spent together. Which he did, thank God! He wasn’t used to people making a big fuss around him, and he welcomed the change. We got to talk about his family, and he shared with me about his mum. She was always very kind to him, and she gave him a unique name. It was a name only she knows, and to this day he has not shared it with me as this was special between the two of them. She also explained that he would get a name given to him by us people, and he should get used to this.

I asked if him if he liked the name Emiel, he said “Yes, I do. But why do people call me Albert? It has a very negative ring to it, and it always seems that people are angry with me. The name is just not inviting, even between the other horses.” He could hear people say his name, and he knew trouble would follow. The other thing he wondered is that they all pronounced the name Emiel van de koekoek wrong as well. It made him very upset. We spoke about it a bit more and about his behaviour, as that was not always very kind. Well, he decided to start to live up to his name. The name only attracted lousy behaviour. I had to laugh about it, as this is a choice you make, Emiel. You do have an option to behave in a friendly way and ignore the negative feeling you get with it. I pointed out that biting people out of nowhere is not pleasant, and he did hurt some people very badly. Some of these people did mean him well. Giving them a change would be a better choice. He didn’t agree with me, but I promised we would call him Emiel for as long as we know him. He was delighted about that.

A new home and a new name

A few months ago, Emiel got the fantastic opportunity to go and retire, which meant for him to move to a different barn. It was indeed a beautiful gift that was given to this misunderstood horse. I was talking with the family who was going to take care of him at the retirement place and I shared this story. We had a discussion with Emiel about his name. As he was going to a new home, he could choose a new name. He loved that idea. So what was it going to be? Trust me, when I share with you, I tried to figure out the name his mum gave him. He made me promise to never ask about it again, and I did.

We gave him a couple of options; the family at the retirement home did a lot of research about the meaning of several names. He picked his new name REX. The name has its origin in Latin, and it means king. It still puts a smile on my face as he travelled as a king. His behaviour is like a king and at the moment he lives like a king.

As it was in Emiel’s case, a name is important to an animal, as well as to the health of your relationship with each other. If you’d like to connect with your pet on another level and find out whether they love or loathe their given name, take a look at what’s on offer on the Services page.

Bond with a horse on a spiritual level.

Download my free “The power of the horse” guided meditation here. 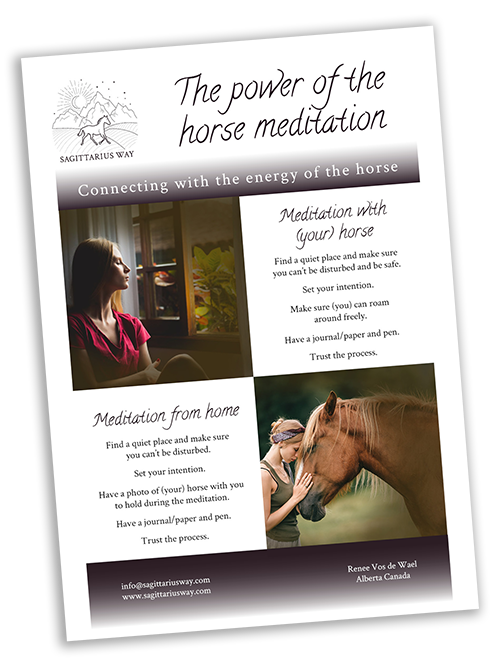